Home » STUDY IN EUROPE » ABOUT EUROPE
«

Europe is, by convention, one of the world's seven continents. Comprising the westernmost peninsula of Eurasia, Europe is generally divided from Asia by the watershed divides of the Ural and Caucasus Mountains, the Ural River, the Caspian and Black Seas, and the waterways connecting the Black and Aegean Seas.
Europe is bordered by the Arctic Ocean to the north, the Atlantic Ocean to the west, the Mediterranean Sea to the south, and the Black Sea and connected waterways to the southeast. Yet the borders of Europe—a concept dating back to classical antiquity—are somewhat arbitrary, as the primarily physiographic term "continent" can incorporate cultural and political elements.
Europe is the world's second-smallest continent by surface area, covering about 10,180,000 square kilometres (3,930,000 sq mi) or 2% of the Earth's surface and about 6.8% of its land area. Of Europe's approximately 50 countries, Russia is by far the largest by both area and population, taking up 40% of the continent (although the country has territory in both Europe and Asia), while Vatican City is the smallest. Europe is the third-most populous continent after Asia and Africa, with a population of 739-743 million or about 11% of the world's population. The most commonly used currency is the euro.
Europe, in particular Ancient Greece and Ancient Rome, is the birthplace of Western culture. It played a predominant role in global affairs from the 15th century onwards, especially after the beginning of colonialism. Between the 16th and 20th centuries, European nations controlled at various times the Americas, most of Africa, Oceania, and the overwhelming majority of Asia. The Industrial Revolution, which began in Great Britain around the end of the 18th century, gave rise to radical economic, cultural, and social change in Western Europe, and eventually the wider world. Demographic growth meant that, by 1900, Europe's share of the world's population was 25%.
Both world wars were largely focused upon Europe, greatly contributing to a decline in Western European dominance in world affairs by the mid-20th century as the United States and Soviet Union took prominence. During the Cold War, Europe was divided along the Iron Curtain between NATO in the west and the Warsaw Pact in the east. European integration led to the formation of the Council of Europe and the European Union in Western Europe, both of which have been expanding eastward since the revolutions of 1989 and the fall of the Soviet Union in 1991. The European Union nowadays has growing influence over its member countries. Many European countries are members of the Schengen Area, which abolishes border and immigration controls among its members.

Climate
Europe lies mainly in the temperate climate zones, being subjected to prevailing westerlies.
The climate is milder in comparison to other areas of the same latitude around the globe due to the influence of the Gulf Stream. The Gulf Stream is nicknamed "Europe's central heating", because it makes Europe's climate warmer and wetter than it would otherwise be. The Gulf Stream not only carries warm water to Europe's coast but also warms up the prevailing westerly winds that blow across the continent from the Atlantic Ocean.
Therefore the average temperature throughout the year of Naples is 16 °C (60.8 °F), while it is only 12 °C (53.6 °F) in New York City which is almost on the same latitude. Berlin, Germany; Calgary, Canada; and Irkutsk, in the Asian part of Russia, lie on around the same latitude; January temperatures in Berlin average around 8 °C (15 °F) higher than those in Calgary, and they are almost 22 °C (40 °F) higher than average temperatures in Irkutsk

European languages mostly fall within three Indo-European language groups: the Romance languages, derived from the Latin of the Roman Empire; the Germanic languages, whose ancestor language came from southern Scandinavia; and the Slavic languages.
Slavic languages are most spoken by the number of native speakers in Europe; they are spoken in Central, Eastern, and Southeastern Europe. Romance languages are spoken primarily in south-western Europe as well as in Romania and Moldova, in Central or Eastern Europe. Germanic languages are spoken in Northern Europe, the British Isles and some parts of Central Europe.
Many other languages outside the three main groups exist in Europe. Other Indo-European languages include the Baltic group (that is, Latvian and Lithuanian), the Celtic group (that is, Irish, Scottish Gaelic, Manx, Welsh, Cornish, and Breton), Greek, Armenian, and Albanian. In addition, a distinct group of Uralic languages (Estonian, Finnish, and Hungarian) is spoken mainly in Estonia, Finland, and Hungary, while Kartvelian languages (Georgian, Mingrelian, and Svan), are spoken primarily in Georgia, and two other language families reside in the North Caucasus (termed Northeast Caucasian, most notably including Chechen, Avar and Lezgin and Northwest Caucasian, notably including Adyghe). Maltese is the only Semitic language that is official within the EU, while Basque is the only European language isolate. Turkic languages include Azerbaijani and Turkish, in addition to the languages of minority nations in Russia.
Multilingualism and the protection of regional and minority languages are recognised political goals in Europe today. The Council of Europe Framework Convention for the Protection of National Minorities and the Council of Europe's European Charter for Regional or Minority Languages set up a legal framework for language rights in Europe.
Countries

Countries in Europe are presented below in different groups and associations they belong. 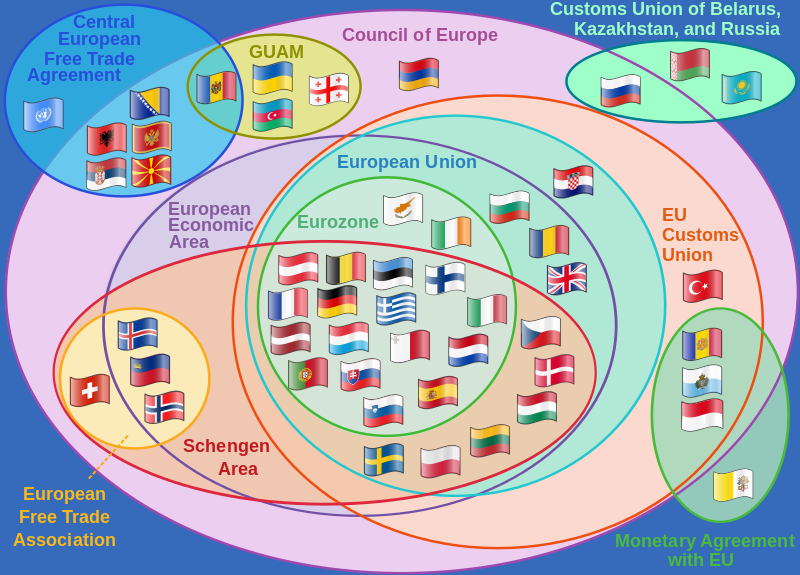 Tagged with: STUDY IN EUROPE